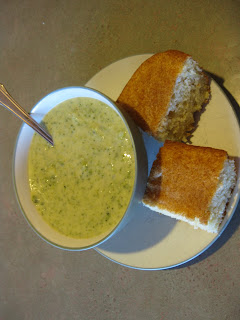 Sorry again about the sideways pictures. I should learn how to upload pictures from my husband's Ipod instead!

Tonight I made some Broccoli Cheese soup with my favorite cornbread recipe. I had to use frozen broccoli from the summer. I didn't have Bisquick for the cornbread, so I just used a biscuit recipe I had and winged it by using the dry ingredients and the fat, but no milk. I followed the cornbread recipe like is says, but used my biscuit mix in place of the Bisquick. It worked out better than I thought it would and tastes great! For the soup, I cooked broccoli, peeled and diced potatoes and some chopped onion. I made a white sauce, then added cheese, salt, black pepper, cayenne and some Cajun seasoning. My new thing is using lots of cayenne pepper. I love the kick it gives. The original recipe used a can of cream of celery in it, but since I was making half the recipe I left it out and just sauteed celery and used that. I added the cooked veggies to the cheese sauce after it was done.
Posted by Marianne

Email ThisBlogThis!Share to TwitterShare to FacebookShare to Pinterest
Labels: What's For Dinner Tonight?