As I was sitting down today for a break from garden work, I thought of organizing and clutter and thought of all of the websites that show how to organize your loads of stuff.  The fact of the matter is that clutter is clutter, whether it is in lots of bins or not.  If you don't use it and need it then it really doesn't need to be around.  One of my family members sent me this picture of their kitchen cupboard: 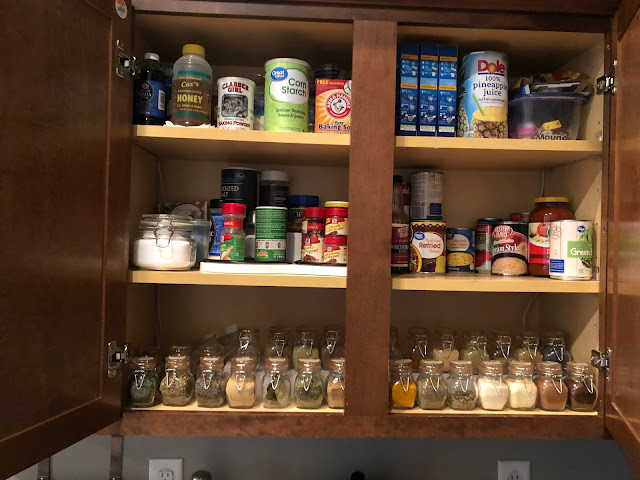 I wish I had a before and after picture.  We have visited their home many times, and they have consolidated two cupboards into one and it is VERY ORGANIZED!  I am so impressed.  It is much easier to open a cupboard that looks like this than one that is a huge mess.
Back to the topic at hand.  I have several friends that go out and buy tons of stuff because it was a good deal.  I personally don't think that anyone needs a shopping cart full of Valentine's day stuff, even if they got it for 90 percent off.  I am all for getting good deals, but there needs to be a limit.  No one NEEDS that much stuff.  So, even if you put all that Valentine's day stuff into 5 big bins, most of it is still clutter even though it is organized.  It is also money that is wasted, even though it was 90 percent off.  Even if you got $300 dollars worth of stuff for $30, if it is things you really don't need than you have just wasted money.  It may not sound like a lot, but those things add up.  And, who wants a closet full of Valentine's day stuff?  It is hard enough trying to keep your closets clean with the things you need.
For some reason, shopping and getting a good deal gives people a high.  They feel good about themselves for getting such a good bargain.  But, it is all about the bargain, not about the need or use of it.  If you are one of those people, try to find a different way to feel good about yourself.  Because once the high is gone, you would then have to get another bargain to keep it going.  Some people are addicted to alcohol, some to junk food, and some are addicted to shopping.
Once something is in your home, it is SO hard to get rid of it.  So, my advice would be to really think carefully before buying something,  Even if you can put it in bins, why have all that stuff around that you don't need.  You actually get a better deal by NOT BUYING then by getting a good deal.   So instead of getting $500 of good bargains at 75 percent off, save your money and use that $125 to get something you really want and need.  You will thank yourself for doing it.
Posted by Marianne