Spendwise dad: The FreedomPop Phone: Free smartphone service? Is this for real? 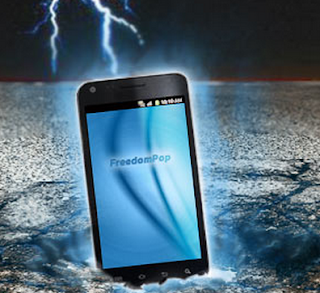 We had been anxiously awaiting FreedomPop's release of their free service smartphone since it was announced early this past summer. We were already familiar with their free service for mobile hotspots, but since we don't get 4G coverage in Colorado Springs, we weren't terribly interested in that. I have some family members who have been using their paid hotspots as an economy primary internet service for a few months and they seem to be getting along okay.

A couple weeks ago FreedomPop opened up their smartphone business to beta testers in select areas. Colorado Springs, unfortunately, was not one of those areas. I suspect this is because the phone utilizes the Sprint data network for voice calls and we only have 3G Sprint coverage in the Springs. I can imagine they wanted to run their beta in areas that would have the best chance of making decent phone calls. Nevertheless, I fooled the entry page into allowing me to purchase by inputting my parents address in Portland. I was able to change the billing and shipping address easily later on in the process and was even able to select a phone number in our local area code.

The phone costs $99 plus tax and the free service includes 200 minutes, 200 texts and 500MB of data. We decided that regardless of the call quality, you just can't beat free. Since is their first release and is still in Beta, we expect that things will improve from what we observe in this first go-around.

We received the phone last night a couple of days earlier than expected and via USPS rather than FedEx as expected. It came in simple box with just the phone, adapter, USB cable and a single slip of paper on how to get started.

The phone is an HTC Evo Design 4G (aka HTC Hero S). It is smaller than I was expecting because my last HTC phone was a Rezound and I just had figured it would be the same size. My wife didn't like the size of my Rezound so she was much happier with the Design 4G. It is running a custom FreedomPop tailored Android 2.3 ROM that was apparently installed with root enabled and with ClockWorkMod recovery.

When I first powered on the phone, it went straight into CWM recovery. This surprised me, but because I am familiar with it, I was easily able to reboot and then it went straight into loading the ROM. The next inconsistency I noticed was I was presented with a screen asking for my FreedomPop email address. When I entered it and submitted, the field cleared and did nothing. I repeated the entry a few times to no avail. I finally just backed out of the form and was able to go along my merry way. Later when I attempted to make a call, it asked for my email again and it worked.

The phone, albeit a bit dated, is very responsive. Especially compared to the Motorola Defy XT offering of Republic Wireless. I wish it had a newer version of Android, but FP has said that Jelly Bean should be coming sometime in the forseeable future. It looks like the internal memory is 2GB with about 600MB or 700MB available for apps and it has an 8GB SD card. One plus of getting an older phone like this is the accessories on Amazon.com are dirt cheap. We got a case and screen protectors together for less than $7 shipped!

The calling service is setup using a SIP client that integrates with the built-in dialer. I have used the built-in android SIP features before and was not terribly impressed so I don't have high expectations of call quality on this phone. Typically, in the past, I have gotten echos, delays, cutting out and dropped calls when using SIP, especially over cellular data. We tried a call over cell today and the quality was actually pretty good. There seemed to be a noticeable delay but no echo or weird noises.

The SIP settings default to inbound over WiFi only. This is because having a SIP client constantly connected to monitor for inbound calls while on cellular data can run the battery down. I thought it was kind of lame to have this as the default setting since, who uses a cell phone like that? This phone is for my wife and I want her to be able to receive phone calls while she is out and about, so I decided to enable this despite the detriment to the battery life.

Google Voice
I was really hoping to get Google Voice fully integrated with this phone, but my hopes were dashed when I realized that the SIP client being used with FreedomPop's service was going to prevent that. I was able to setup Google Voice to make and receive text messages as well as receive inbound calls. The problem comes when you try to make an outbound call. The SIP client and the built-in dialer both completely disregard the setting to use Google Voice for outbound calls. This is basically the same setup my wife had to deal with on her feature phone with Google Voice so it doesn't really bother her too much. When she makes calls people will just see her true phone number rather than her GV number.

Benefits of root
I found it interesting that the phone came with supersu installed. I suspect it wouldn't be difficult to setup your own SIP program to use Google Voice and bypass the FreedomPop voice service altogether. It would eat into your data plan rather than using your allotted 200 minutes, for better or for worse. With root and a decent understanding of how the phone is currently setup, it wouldn't be difficult to tweak this phone to make it behave however you want.

So far we are pleased with what we get for the price. You just can't beat free. If you need more minutes or more data, there are higher paid tiers offered but they are still much cheaper than what you would pay anywhere else. We are going to keep this phone and look forward to future updates. It is indeed for real. Feel free to post any questions or comments below.

UPDATE 10/18/13
Battery life is pretty bad with SIP running constantly since it prevents the phone from going into deep sleep. Since this phone has user-replaceable batteries, you could buy some spares and an external charger, but that isn't much fun. It seems my wife has had to recharge the phone at least once during the day to make it last the entire day. We have chargers at home and in the car, so that isn't a big deal. These are also refurbished phones so we don't know what the battery's condition was when we got it. Hopefully they would have replaced it with a new one before reselling it, but who knows?
Posted by Drew