Yesterday, we went on a walk and saw two apple tress that had a ton of apples. There were almost as many on the ground as there were in the trees, so I figured that nobody wanted them, and they also were clearly not on anyone's property. So, my son and I picked some apples to make apple sauce. The apples are very small and bitter, but after washing, cutting, cooking, and lots of sugar, they made a delicious and huge batch of applesauce.

Using food from trees helps reduce waste (all of the apples I used won't end up on the ground), saves money (they were free), and is very satisfying. 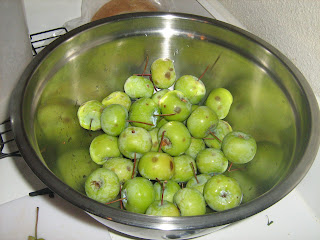 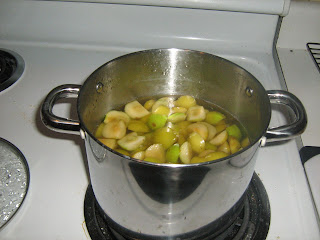 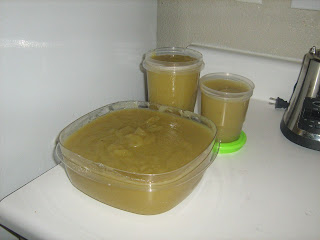 I should have pulled out my Canner...but didn't think about it until I realized I had a lot more applesauce than we could eat in a reasonable amount of time...so I put some in the freezer, and we'll be eating the rest of it over the next week or so.
Posted by Statsmom

Email ThisBlogThis!Share to TwitterShare to FacebookShare to Pinterest
Labels: Canning and Freezing for the Year, Simple Ways to Save