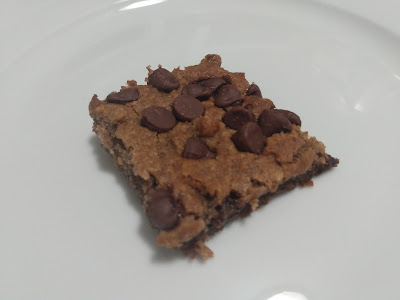 I had some leftover black-eyed peas and found a recipe for bean blondies. I followed it rather loosely, which may have been the reason it didn't turn out as nicely as I'd hoped. I like that recipe calls for honey instead of sugar so I feel like I'm eating healthier! I used black-eyed peas instead of great northern beans, substituted 1/2 tsp of almond extract for 1 tsp of vanilla, chocolate chips instead of vanilla chips, and coconut oil instead of butter. Even after cooking for an extra 25 minutes, the blondies were still extremely gooey. I let them cool and then ate one with ice cream. It was still very squishy but made a good ice cream topping. After letting the rest chill overnight, I gave pieces to my kids at lunch. They really liked them, so at least that was a win, but I don't plan to make this recipe again.

Email ThisBlogThis!Share to TwitterShare to FacebookShare to Pinterest
Labels: 30 Days of Beans in September