I wasn't really sure what I would do for today.  Usually we only have eaten cucumbers dipped in hummus or in a salad.  As I looked over the internet, I found lots of recipes.  And, I am only linking to one of the websites I found.  It was amazing how many things you can do with cucumbers!   So, I decided to give it a try. 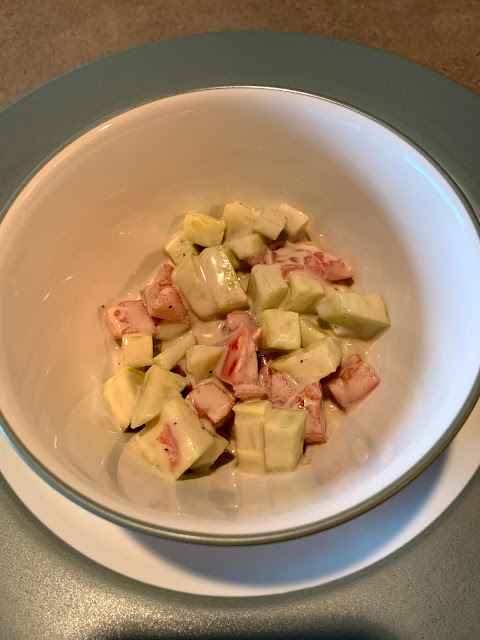 The first thing I made was a Tahini salad.  I had this several times as a child.  You cut up cucumbers and tomatoes that have the seeds removed.  To make the dressing, you use equal parts of tahini and lemon juice and mix it together.  Then you add water a little at a time to get the desired consistency.  Add salt and pepper and mix the dressing with the cucumbers and tomatoes.  If you want, you can also add a pinch of garlic or onion powder or even some fresh parsley.  I liked it so much that I ate the whole thing.  Mind you, I didn't make much, but since I had done the deed I decided to make something else for my husband. 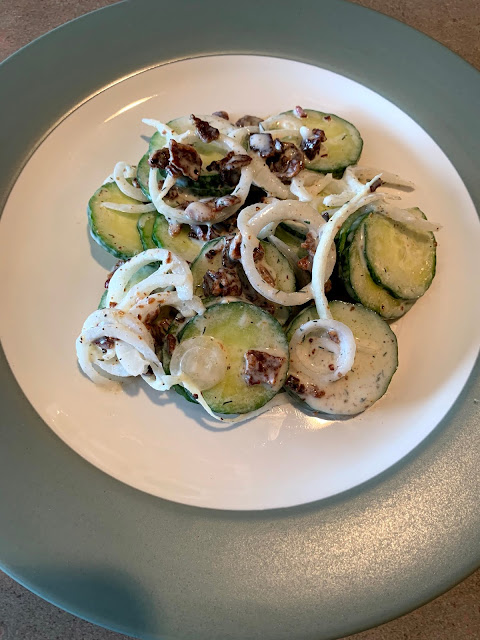 I decided to make this cucumber salad.  My husband likes things with vinegar and sugar in it.  I didn't have a red onion, so I used a regular one, which it said you could do in the recipe.  Then, it looked kind of unappetizing, so I cooked a slice of bacon and added it.  It still looked like it needed something, so I added sour cream, but looking back I probably should have chosen mayonnaise.  Oh well, he liked it and it made up for me eating the Tahini salad.  He got to eat all of the cucumber salad, which I didn't really want anyway so it was a win-win.

If you have some extra cucumbers, there are a lot of recipes out there that use cucumbers.  I had no idea it was such a versatile veggie.

Email ThisBlogThis!Share to TwitterShare to FacebookShare to Pinterest
Labels: Add Variety to your Veggies 2020