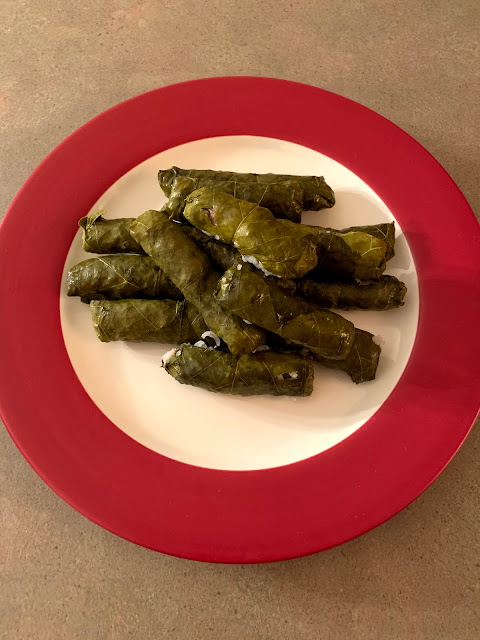 We have a grape vine in our back yard.  In the past 4 years, it has only produced grapes once, and it was only 3 small grapes.  Well, last year I was going to just pull it out and the thought came to me to try making homemade stuffed grape leaves.  I had never done it before, and it seemed really strange to eat the leaves, but we had bought some in the past so I decided to try it.

You have to boil the grape leaves before rolling them.  It turns the pretty green color into a more olive color.  That is exactly what you want.  Next, you cut the stem out.  You don't want any hard stems.  I rolled mine with a mixture of uncooked rice and uncooked ground beef.  It was about half and half.  I used garlic powder, onion powder, allspice, parsley, salt and pepper. After you roll them you put them tightly in a pan and cover with the right amount of water and cook them.

I can't begin to tell you how good they tasted.  Middle Easterners have some pretty good food, like hummus for example, and this is another dish that is great.  There is such a difference making your own versus buying the stuff in jars at the store that cost about $8 per jar.  I never want to eat them out of a jar again!

It is always fun to try something new and even more exciting when it turns out SO well.  Grape leaves are very healthy.  I also know mine are organic and have not been sprayed with anything.  You don't want to use grape leaves that have been sprayed.

Email ThisBlogThis!Share to TwitterShare to FacebookShare to Pinterest
Labels: Add Variety to your Veggies 2020