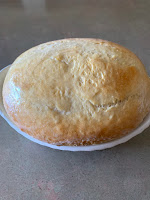 I was looking through my recipes and found this on the other side of one of my favorite recipes.  It is from an Eating Well magazine, but the page was copied for me by a friend so I don't know more about the origin of the recipe.

The bread turned out well, but I only made 1/4 of the recipe.  It is a heavier dough, but very soft, but if I were to make it again, I would definitely add more yeast and sugar.  I would also make rolls instead since the bread was slightly doughy inside.  It tastes great though.  It was like a part Artisan bread and part white bread.

I don't think I will share the recipe since it took a long time to make and it was very tedious.  Most people wouldn't be interested in making it.

If you want to try a recipe using potatoes, try the one here.  It is easier and the rolls are fantastic.

Email ThisBlogThis!Share to TwitterShare to FacebookShare to Pinterest
Labels: 31 Days of Bread