16 Casseroles for UNDER $1 Per Person

I am posting 16 casseroles that you can make for $1 or less per serving.  Many of these are kid friendly as well!  I am using Walmart's regular prices for the cost analysis.  I am sure you can find items for less, but assuming you don't have time to shop around for better prices or don't want to, these are the prices you would pay.  The cost for each serving varies between 65 cents to 99 cents.  The purpose of this post is to show how you can take some of your recipes or random ones on the internet and find a way to fit into your budget.  Some of the recipes didn't need to be tweaked at all.  Some definitely had to be tweaked to stay in the budget and there were a few we couldn't make because it was just too costly.  But, there are so many you CAN make on a limited budget.  Thanks to all of the families who helped by making the casseroles for this post. 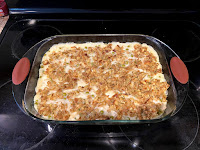 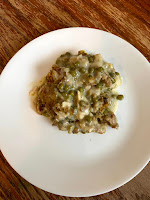 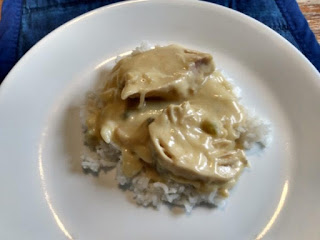 Put chicken breasts in a 9 x 13 pan.  Mix UNDILUTED cream of soups together and cooks at 350 for about 1 1/2 hours until chicken is cooked completely through.  Cook rice according to directions on the package.  Serve on top of rice.   I usually cut up all of the cooked chicken pieces after it is cooked  with soups and before serving.  That way it is more evenly distributed.  But you can serve it in larger pieces if you prefer. 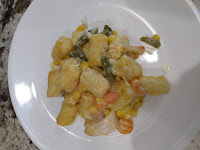 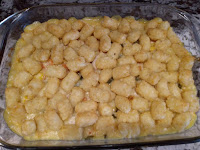 Cook chicken breasts ahead.  Mix cans of cream of chicken, frozen mixed vegetables, and COOKED chicken together.  Put in 9x13 inch casserole dish.  Top with as many tater tots as needed to cover the top.  Bake at 350 for around 35 minutes or so until done. 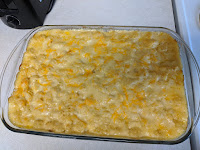 I used this recipe but substituted the sharp white cheddar for sharp orange cheddar to save $1.16.  You can also use margarine instead of butter to save an additional 33 cents. 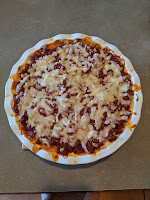 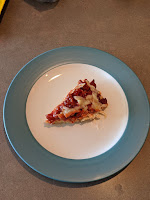 Break spaghetti in half.  Cook in boiling salted water until done according to package.  Drain.  While still warm, combine cooked spaghetti with eggs and Parmesan cheese.  pour into a well greased 10 inch pie plate and pat mixtures up and around the sides with a spoon.  Melt butter, add onion and saute until limp.  Stir in sour cream and spoon over spaghetti.  Cook sausage in skillet until done.  Drain.  Add tomato paste and water.  Simmer 10 minutes.  Spoon sausage on top of sour cream mixture.  Bake at 350 degrees for 25 minutes.  Sprinkle mozzarella cheese on top and return to oven until cheese melts.  Take out of the oven and cool slightly before serving.

Ways to save money:  Use only half of the Italian sausage and that would significantly change the cost, use margarine instead of butter to save 13 cents, and buy items on sale which would save as well. 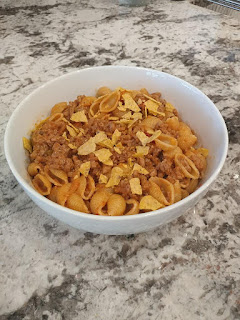 Recipe for this is found here.    To save money, you could use less meat or use ground turkey. 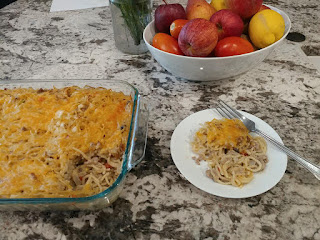 I used this recipe here for this casserole.  I did replace the whole chicken with 1 pound of chicken breasts.  This change made the recipe easier to make and save money.I also used 2 cups of cheese instead of 2 1/2 to help the recipe stay in the $1 or less per serving category.

I made a few modifications to this recipe to make it fit in the budget I wanted.  I used half of a pound of Italian sausage, I used 1 pound of red potatoes and just sliced them small instead of using baby potatoes, I also used regular corn instead of fire roasted corn to save almost a dollar.  I used regular canned tomatoes instead of fire roasted as well to save 24 cents.  I used half of an onion and half of a green pepper instead of a whole.  I used 1/3 cup of cheese instead of 1 cup.   I didn't realize when I had originally done the cost analysis that the recipe was only for 6 instead of 8 servings, so I made more changes because of that. 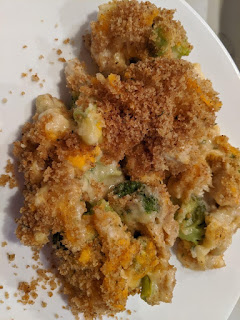 The recipe I used is found here.  I made a few modifications, but you can still use butter and fresh broccoli be close to the budget.  By using frozen broccoli, you save about 33 cents and by using margarine for the dish and the topping you save another 23 cents.  The prices below are using frozen broccoli and margarine.  I also used 1 pound of cooked chicken breasts, cubed instead of 3 cups of rotisserie chicken. 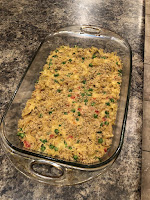 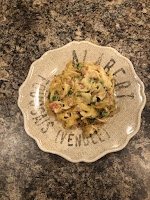 This recipe from Taste of Home is found here.  Since the price was so reasonable I didn't make any changes to the recipe.

Here is the Cost Analysis: The Cajun Pasta Recipe I used is here.  I toned down the spice by using less (1/3) than the original recipe.  It was plenty spicy still.  I used about 1/2 the chicken and Cajun sausage and total eliminated the shrimp to cut the cost of the recipe.  The last change was to use regular salt instead of Kosher salt. 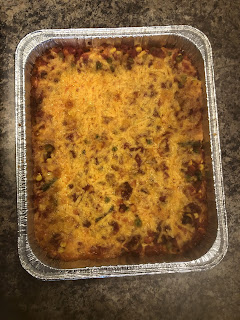 The recipe for this casserole is found here.  I had to make a few changes to fit in the budget, since it only makes 6 servings.  I used half the ground beef, bought a 29 oz can of tomatoes which was less than two cans of 14 oz tomatoes, and reduced the frozen veggies to 1 1/2 cups instead of 2. 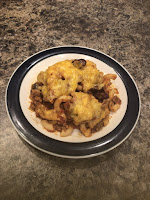 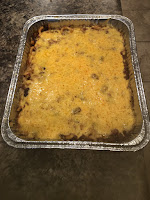 This recipe is found here.  The changes I made to this was to use half of the ground beef and skip the green onions. 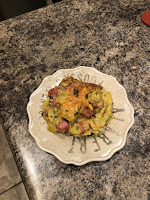 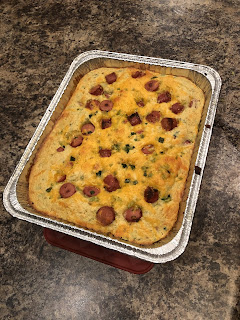 The recipe for this is found here

This last casserole is made up from one of the other Spendwise Moms who wanted to use up some things in her cupboard.  It is a take off from the regular Shepherd's Pie. 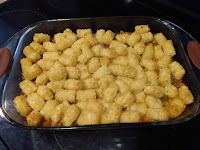 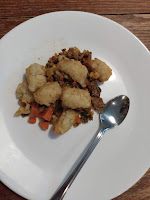 Brown beef and onions together and then drain grease.  Add frozen vegetables, diced tomatoes, salt and pepper.  Put beggie/meat mixture into a 9x13 inch pan and then top with the tater tots.  Bake at 375 for 30-40 minutes or until the tater tots are crispy and golden brown.

Note:  Cream of mushroom would probably work well in place of the canned tomatoes if you wish.