This bread sounded cool, so I decided to make it.  One problem, the videos I saw weren't in English and so I had to watch and figure out a recipe.  I looked at pictures online, and there was a lot of variation in them.  They looked anywhere from pita bread to Navajo fry bread to Irish soda bread.  As I searched, I noticed that several of the recipes were basic and similar.  Others had more ingredients.  I made the basic one first.  There was so much baking powder in it, I wanted to gag, but it didn't bother my husband.  I even cut down some of the baking powder and it still was too much.  So, I looked some more and watched a monk make Tibetan bread.  I couldn't understand them, but got the basic idea and made up a recipe.  Boy, did the next batch taste great!!!!  We had a hard time stopping after we started eating it. 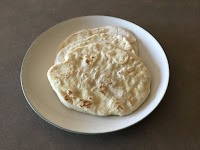 Mix together.  If necessary, add a little flour so the dough isn't sticky.  Let rise for 30 minutes in a greased bowl.  Divide into 4 parts.  Roll out like a tortilla, but a little bit thicker.  Cook in a hot iron skillet until lightly brown on each side.  This is a very simple recipe and easy to make if you can stand the aftertaste of the baking powder.  I personally think it is way too much and I decreased it from the recipes I saw.  If you want the best tasting bread, I would try the other recipe. 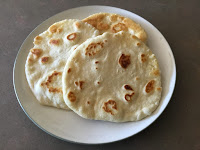 1/3 cup canola or vegetable oil for frying
After being a bit disappointed in the previous recipe, I found this one made by a Monk and I couldn't understand, but I watched to see what he was putting in it and tried to do my best to make up a recipe that would replicate it.
For this recipe, combine all of the ingredients and mix them together well with your hands.  Divide into 4 parts and roll out a bit thicker than a tortilla or for pita bread.  Use a bit of flour if the dough sticks to your counter.  Put the 1/3 cup canola or vegetable oil in a cast iron skillet and heat.  When oil is hot, carefully cook the bread for a about 60-90 seconds on each side, or until the dough is brown on some parts.  Carefully turn it over and do the same for the other side.  The first tortilla is the one you need to be most careful about since there is more hot oil while cooking.  When there are brown spots on each side, put the bread on a plate with paper towels between each one to absorb any oil.  My bread didn't have hardly any oil on the paper towels, so I don't know how necessary that step is.  You could probably skip it.  This bread is best eating right after it cools down.  It tastes great with hummus, any type of filling like tuna, egg salad, pulled pork, salad, or try making some kind of Tibetan filling if you are interested.  This bread tasted SO good.  It was so hard to stop.  We definitely ate more than we should have!

Email ThisBlogThis!Share to TwitterShare to FacebookShare to Pinterest
Labels: 31 Days of Bread