How to Cut the Cost of a Recipe: Enchiladas for 32 cents per person (4 people, 2 enchiladas each)

When living on a tight budget, sometimes you may also feel limited in what you can cook.  This post will show you how you can cut the cost of a recipe to fit into your budget.  Let's take for instance, that you would like to make enchiladas.  I found a good recipe here that we can use.  Instead of using chicken and cheese, try using Refried beans and rice.  Everything tastes better with cheese, of course, but to cut the cost we will leave out the cheese.  The spicy sauce will make it taste just fine without the cheese.  Instead of buying tortillas, you could make your own.  I made one fourth of my tortilla recipe and made 8 small tortillas.  So, the total cost for the ingredients using Walmart prices, other than the sauce, is about:

Total cost for ingredients besides sauce is $1.08

I don't know how to make good corn tortillas, so I used flour tortillas for this example.

(If you want to save even more money, you can make your own refried beans or use a can of pinto beans and mash them up in a food processor) 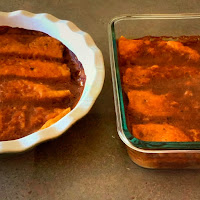 Now, let's look at the recipe for the enchilada sauce.  This is the best enchilada sauce I have tried from scratch so far.  But, some of the ingredients aren't things that you may have on hand, so I tried it with substitutions and it still tasted fine.  I used:

I figured that more people would have the substitutions on hand, in addition to cutting the cost, so that is why I tried it with substitutions.  The total cost of the sauce using Walmart prices is:

Total cost:  20 cents   MUCH Cheaper than buying the enchilada sauce in the store and is easy to make!


Total cost to make the recipe using substitutions is $1.28 which gives you 2 enchiladas each for four people or only 32 cents per person.

Using your own recipes, figure out ways that you can cut costs!

Email ThisBlogThis!Share to TwitterShare to FacebookShare to Pinterest
Labels: $50 Grocery Budget, Cutting the Cost of a Recipe