While I cleaned out my kitchen cupboards, I decided to start using up some of the things that needed to be used.  First on the list was some semolina flour.  I looked up two different bread recipes.  The first one turned out well, but I didn't really like the taste of it.  The other one is rising as I write and I will find out if I like it.  At least this one has a little sugar and some oil in it!  The dough feels much softer.  My semolina is gone now and I don't plan on buying another package in the future!

Yesterday I tried a Southwestern Chicken and Barley Chili which was not a family favorite at all.  It was palatable with more cheese than someone should eat in a meal.  I won't be making that again, ever.  But, it did use canned tomatoes, tomato sauce, and some barley that needed to be used.  I have figured out that don't like barley in a tomato based recipe. 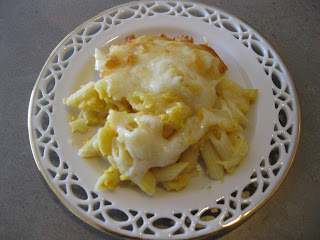 The last recipe I tried because I had some pasta I needed to use as well as 4 different kinds of cheeses in small amounts that I wanted to finish.  I also had some butternut squash in the freezer, so I decided to try this recipe.  I tweaked it a bit and probably added more cheese than recipe called for, but I used up the things I needed to and it tastes pretty good.  I didn't use half and half or it would have tasted much better.  It was the best of these recipes that I tried, in trying to use up stuff in my pantry.  It even looks appetizing.  So, if you like butternut squash and want to try something different, it was worth the time and effort.  It was really easy.  I only made half of a recipe, since I was a bit cautious after being stuck with lots of chili from yesterday that I am not fond of.

Do you have a recipe that you would like to share?  I would love to try some recipes that use up pantry stuff.  I have orzo, rice, barley, couscous and lots of pasta that need to be used.  Any bean or lentil recipes would be appreciated too!