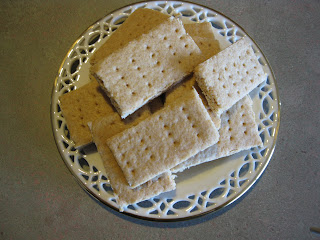 This past year I have started making crackers and chips from scratch.  I like knowing what is in the food I eat.  I tried this other graham cracker recipe so I could compare the two.  My daughter likes the other one better, but thinks this one tastes more like graham crackers from the store.  They roll out very easily.  I would suggest using parchment paper to roll it out on and then bake them on the same parchment.  That way you don't have to roll it out on wax paper like the recipe says and flip it over to a cookie sheet.  For those who haven't tried parchment paper yet, it is wonderful.  You can use it for cookies, bread, etc. and you don't even need to grease it.  For crackers and chips, they just slide off after they are cooked.  I think I will try making my own recipe next time.  I would like to use brown sugar instead of white and would like to add a little molasses and maybe a very little bit of cinnamon.  I also don't use shortening in recipes most of the time, and would like to try it with butter instead or a combination.  It was definitely worth the time it took to make these.  One really nice thing is that you can make them as thick or thin as you like them.  And, you can bake them to be more crispy or bake them less to be softer.  I had a little bit of difficulty breaking apart some of the crackers, so I think I would cut them along the lines before they cool instead of after.  This is a pretty good recipe, but I am going to try this Martha Stewart one before I decide for sure.  The ingredients in hers look more like what I am looking for.  I will just make them a little thicker since we like them better that way.