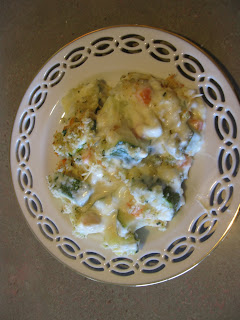 Because we have some zucchini that needs to be eaten, I planned a zucchini casserole in the menu for the week. I used this recipe as a guide, but did my own thing with what I had on hand. I thawed some rolls I had in the freezer and pulsed them in the food processor along with Cajun seasoning and fresh sage and the melted butter the recipe calls for. I used that instead of Stove Top stuffing. I also used more Parmesan cheese than the recipe called for and added some Italian shredded cheese to it. This turned out better than I thought it would. Of course, I had to taste it! I think my daughter will eat it without too many complaints! We will probably have some rolls or bread and maybe some fruit along with this casserole for dinner. I had to make it this morning since I will be busy this afternoon and won't have time.

What are you having for dinner tonight? Do you have a tried and true recipe you would like to share?

Email ThisBlogThis!Share to TwitterShare to FacebookShare to Pinterest
Labels: What's For Dinner Tonight?